Here’s a thought: in a matter of years, the worker and the manager positions will be reversed in the organisational hierarchy.

There are three parts to the economics of pay and hierarchy:

Workers have little control and authority over assets and are paid to ‘just work’.  At the low end, managers are given some control over the assets used in daily operations including stock and rosters.  Each promotion and pay rise recognises the expanding scope of assets under the manager’s control.  At the extreme high level is the CEO salary such as Charif Souki, CEO of Cheniere Energy who, according to Bloomberg, tops the list in 2014 with his $142 million salary package.

The greater a person contributes to results, the higher the reward, such as the sales manager whose efforts directly impact the bottom line.  On the other hand, the human resources manager at the same level manages workforce costs and is generally less well rewarded.

As the law of supply and demand dictates, the more available or replaceable the skill or ability, the lower the pay.

In the industrial economy the hierarchical model was straightforward.  Because managers controlled more assets including the people who provided the labour, they command a higher position in the hierarchy and were paid more commensurate with that level of seniority.

The dominance of the knowledge worker since the 1990s has been effecting a significant change for enterprises which could drastically alter how the manager position fits in the organisation.

In 1966, management guru, Peter Drucker, had already envisaged the knowledge worker disrupting the standard order of progression from worker to manager.  He wrote, “Every knowledge worker in the modern organization is an “executive” if, by virtue of his position or knowledge, he is responsible for a contribution that materially affects the capacity of the organization to perform and to obtain results.” (The Effective Executive 1966).

Wealth creation in the industrial economy came from the control of physical assets.  Industries such as mining, manufacturing and agriculture created the list of the wealthiest countries and companies.  As the knowledge economy’s growth accelerated in the 1990s, spurred on with the widespread adoption of the internet and technology, the value of enterprises has been changing in a way that most organisations are yet to fully realise. 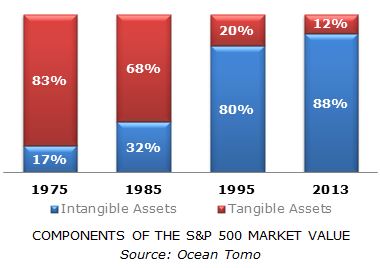 Physical assets are owned by the enterprise, even physical labour which a company has bought the right to control through the employment contract.  The above chart shows how significantly this has changed.  While companies continue to promote and remunerate managers for their ability to control the enterprise’s assets, the majority of the company’s value is no longer in those assets.

Intangible assets are a product of knowledge work.  They include such things as brands, organisational culture, core competences, customer relationships, designs and inventions.  The fundamental difference with knowledge work is the assets do not belong to the enterprise therefore managers cannot control the greatest contribution to the company’s value.

Companies no longer need managers to sit over workers because the company does not own the knowledge.  Whether the ‘knowledge’ is a contact in the government, the knack for spotting the next big fashion trend, the ability to close a sale, or a manner that brings a team together, it will always belong to the person that provides it.  The company that maximises the value of its intangible assets will be the one that has an infrastructure developed to lease the knowledge it needs from the owners, such as through freelancing assignments, strategic alliances or employment systems that tap into the knowledge it needs when it needs it.

Taking Apple for example, a company valued at $400 billion of which intangible assets account for 96 per cent, and one of the most successful companies in history.  Innovation, design and a commitment to placing technology into the hands of people, is how the company achieved such an outstanding result.  It was not achieved through managers installed to keep the knowledge coming, checking whether the ideas were meeting KPI targets so that another market-changing concept like an iPad would emerge by the deadline set by the business plan.

So whatever managers do now, it must be something more than overseeing workers like pickers and packers, who process the company’s physical assets (and even these are being increasingly automated).  It must be something that enhances the organisation as far richer places than a collection of workers mechanically completing tasks.  A bright future would be one where the richness of people collaborating, creating and doing is allowed to happen without the oppression of pre-determined positions monitored by people who are there to manage actuality rather than possibility.  Otherwise in this world the prospect of being given a manager job might be one seen as a demotion.